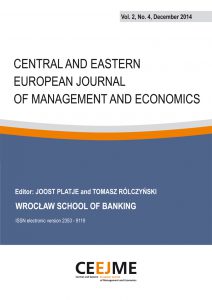 CENTRAL AND EASTERN EUROPEAN JOURNAL OF MANAGEMENT AND ECONOMICS
Vol. 2, No. 4, 221, Dec. 2014, WROCŁAW SCHOOL OF BANKING

Abstract: Most approaches towards management seem to aim at the most economical use of resources during the accomplishment of a pre-determined goal. Different types of capital (physical, intellectual, social) are elementary in achieving the goal. The role of the different types of capital has changed through time, with increasing emphasis on intellectual and social capital. In this context, this paper presents the main features of organizational culture and corporate culture and their impact on the organization’s management.