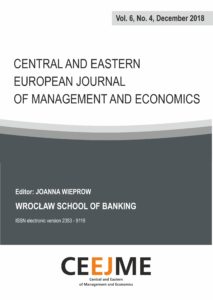 CENTRAL AND EASTERN EUROPEAN JOURNAL OF MANAGEMENT AND ECONOMICS
Vol. 6., No. 4, December 2018, WSB UNIVERSITY IN WROCŁAW

Aim: This paper is devoted to presentation of the international educational project’s GameHub contribution to the development of highly-qualified workforce for Ukrainian gaming industry.

Design / Research methods: Gaming sector in Ukraine is briefly described in terms of its needs for employees. The idea and assumptions of the GameHub project are presented and hitherto achieved results in the project implementation are reported.

Conclusions / findings: Nowadays video game industry (gaming industry, game industry) is listed among sectors with the highest growth dynamics. The number of gamers all over the world is estimated to be to ca. 2.2 billion. Gamers are expected to generate USD 108.9 billion in game revenues in 2017. In Ukraine this sector is at the developmental stage, but it has huge potential manifested in promising projects. Ukraine attracts game industry with considerably low labor costs, but employees have high qualifications in mathematics and computer science as well as fluency in English and Russian.

Originality / value of the article: “GameHub – University–Enterprises Cooperation in Game Industry in Ukraine Project” was created to modernize the existing engineering education in Ukraine by providing universities with infrastructure and educational resources needed for enhancing students’ knowledge and skills in creative game development sector.

Aim: This paper aims to establish whether and to what extent new rules have changed possibilities of incurring a debt by communes since 2014 as well as what changes occurred in the level of their debts over the three years preceding the introduction of the individual debt ratio. As far as its subject is concerned, it aims to compare the influence of new solutions on local government units in the area of Lower Silesian province in cumulative terms.

Design / Research methods: The aim has been attained by comparing the level of debt to be incurred by communes pursuant to the new regulations as well as to the previously binding fifteen-percent limit of a debt service. The analyses were carried out for years 2007-2017. Statistical methods and a ratio analysis were applied.

Conclusions / findings: The IDR formally limited an ability of local government units to incur liabilities. However new solutions (in cumulative terms) did not decrease the scale of making use of debts. The application of IDR also diminished the capacity of communes to incur debts however the limitation was of formal nature.

Originality / value of the article: The subject of the paper falls within the topic of publications concerning the necessity of applying debt limits, changes made previously and current solutions as well as the impact of the IDR on financial management of local government units. This publication is original in terms of analyzing the influence of the IDR on local government units and communes in the area of Lower Silesian province.

Implications of the research (if applicable): The paper constitutes a contribution to the discussion on limitations of the IDR as well as the necessity of changing a present debt limit of local government units.

Limitations of the research (if applicable): The results of analyses and formulated conclusions do not constitute an evaluation of creditworthiness of particular communes. They depict their situation in cumulative terms and reveal consequences of the IDR in the form of a quota not showing other consequences (application of alternative financing methods). The research may be continued by analyzing the impact of IDR on particular types of communes and individual commune. They may concern the character and the scale of other consequences of the IDR.

Aim: The purpose of the study is to compare the impacts of factors such as: average wind speed, energy price, capital and operating costs, on the economic efficiency of a wind farm. The outcomes of such analysis are helpful to support decision making about an investment.

Design / test methods: The paper presents the application of Monte Carlo analysis to simulate the factors influencing the profitability of investments. Wind speed, energy price and operating costs were introduced into the Monte Carlo simulation model in the form of probability distributions with assumed parameters.

Conclusions: The factor that has the greatest impact on the ENPV of the investment is the average wind speed, which has a direct impact on the amount of energy produced. Therefore, the forecasts for atmospheric conditions in RES installations are recommended to be subject to special verification.

Originality / value of the paper: The example presented in the paper demonstrates how using the Monte Carlo method makes it possible to quickly and easily examine the profitability of an investment, taking into account risk factors such as weather conditions, energy prices, etc.

Simplification of decision problem structure by means of DEMATEL application

Aim: Complex analysis results are often simplified for practical reasons. The choice of the simplification range for analysis results is critical for their reliability and the effects of their subsequent application. However, the need for the assessment of the simplification range assumed is often neglected. The same is true in the case of DEcision MAking Trial and Evaluation Laboratory (DEMATEL) technique application. The technique represents a popular tool for the identification of complex structures. DEMATEL enhancement is therefore proposed in the paper to avoid the excessive simplification of the results obtained through its application.

Design/Research method: The original DEMATEL procedure is modified to allow for determining the acceptable level of the simplification of its results.

Conclusions/Findings: The presented sample analysis reveals the feasibility of the modified DEMATEL procedure.

Originality/Value of the article: An important gap in DEMATEL theory is addressed in the paper. The gap may lead to incorrect outcomes with respect to further application of the results provided by DEMATEL application.

ANP shortcuts or how to utilize MDAHP technique

Aim: Multi-Dominant Analytic Hierarchy Process (MDAHP) was devised to solve particular decision-making problems. The same problems may be solved by means of a more universal technique, namely Analytic Network Process (ANP). The originators of MDAHP authoritatively state that both tools could be applied interchangeably with success. The authors’ experience, however, shows that this is not the case. The issue of substitutability of one technique for another is therefore critically discussed in the paper.

Design / research method: The paper presents the comparison of the outcomes of the ANP and MDAHP application to solve a decision-making problem.

Conclusions / findings: The comparison of the effects of utilizing both techniques proves that there are differences as to their actual purpose. These differences make them complement each other perfectly in addressing the same decision-making problem. It also shows that the application of MDAHP is more time consuming.

Originality / value of the article: A critical discussion on the interchangeable application of ANP and MDAHP is presented in the paper.

The synergistic effect of mergers and acquisitions in the pharmaceutical industry

Aim: The aim of the article is to answer the question what value can be generated in the process of enterprise growth by means of taking over other entities.

Research methods: The research was carried out on the basis of 34 historical transactions on the pharmacy market by one entity in the years 2015-2018, while acquiring a number of pharmacies in Poland. This unique combination will allow us to look at the differences between the market value of the pharmacies purchased and their final purchase price. Additionally, the author is attempting to explain the synergy effects achieved.

Findings: The conducted research also shows that there are no grounds to state that the smaller the entity being purchased, the greater the synergy effect. It is known that small entities have much less capacity to generate economies of scale. On its own a smaller entity has a weaker negotiating position with suppliers. In the case of acquisitions of smaller entities in the transactions described, synergies for the company have been much higher than in the case of pharmacy chains, but this is not the rule. It may be concluded that there is a relationship between the unit price of a pharmacy and the synergy effect. The more expensive a pharmacy is acquired, the smaller the space for profit through synergy.

Originality / value of the article: The market of pharmacies in Poland is characterised by high fragmentation. Out of 14.6 thousand pharmacies in Poland, the largest entity on the market does not exceed 5% of market share . This status quo is the result of strong and unclear regulations which hinder entrepreneurs’ operations. For several years, however, strong consolidation tendencies can be seen, which leads to the fact that 56.3% of the market is occupied by pharmacy chains, and 43.7% of the market is comprised of individual pharmacies. The biggest market players try to increase the number of pharmacies mainly through the acquisitions of existing entities.

Limitations of the research: The limitation of research is the use of only one industry – pharmacies market. Other limitation is small sample. In future Author will collect the data for deeper and more extended analysis.

Aim: The purpose of the study is to examine flood risk transfer instruments, such as flood insurance, from the households’ perspective in order to determine households’ preferences concerning the design and the features of these instruments as well as to indicate factors influencing and shaping these preferences.

Design / test methods: The paper presents the outcomes of the social research revealing households preferences towards dealing with flood risk. The research was preceded by the scientific literature review of the theories and heuristics which could be relevant for decision making in the flood hazard proximity. The research, based on semi-structured interviews and questionnaires, was performed in the area of three river basins in Poland, namely: the Upper Narew river basin, the Lower Warta river basin and the Soła river basin. The research areas were chosen based on their geographical, economic and socio-cultural diversity in order to include these factors into analysis.

Conclusions: Households preferences regarding flood risk transfer instruments are influenced by the households attitudes towards risk (level of risk aversity) and the perception of the level of flood hazard determined mostly by the past experiences.

Originality / value of the paper: The original and primary research presented in the paper delivers the outcomes in terms of elicited households’ preferences regarding flood risk transfer instruments and identified factors influencing these preferences.

Aim: This paper consists of a legal analysis pertaining to a situation in which national adjudicating body declares the nullity of the double indexation clause applied in mortgage loan agreements. The research aim is to identify substantive consequences thus arising while drawing on the European Union law implemented into the Polish legal system. In view of the discrepancies and divergences with regard to the interpretation of Directive 93/13/EEC offered by national courts, and in particular by Polish common courts, those aspects need an analysis of the European Court of Justice case-law.

Design / Research methods: The paper was written using the dogmatic method of law analysis, which allows for a comprehensive study of common courts’ practice and its compliance with European Union law.

Conclusions / findings: In conclusion, it appears that in the case of declaration of nullity of the clause laid down in the mortgage loan agreement, such clause shall be recognised as void upon the beginning of its application, without the possibility to restore it by an adjudicating body with a different provision (amending its content).

Originality / value of the article: Although the subject of this paper has both practical and theoretical importance, it has not been exhaustively studied and described by the legal doctrine. It could offer a suitable instrument for law practitioners as well as encourage further academic explorations.

Implications of the research: The paper may exert a significant impact on common courts’ judgements and their compliance with European Union law.