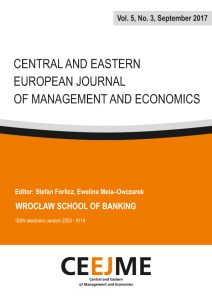 CENTRAL AND EASTERN EUROPEAN JOURNAL OF MANAGEMENT AND ECONOMICS
Vol. 5, No. 3, 5, September 2017, WSB UNIVERSITY IN WROCŁAW

The test of inversion in the analysis of investment funds

Aim: The aim of the paper is to evaluate the quality of investing at OFE (open-ended pension funds) based on the data spanning the period of 2002-2010.

Design/Research method: In the study, the test of inversion was used as a measure of dependence. In the classification of the funds Sharpe measure was adopted.

Conclusions/Findings: Contrary to common expectations, the ranking obtained based on Sharpe measure showed randomness in the ordering of funds, with the period of 2009-2010 being the only exception. These years preceded the first “reform” of OFE.

Originality/Value of the article: For the first time, apart from testing the hypothesis on ranking randomness, an analysis of Type II error was presented, that is, an error consisting in accepting null hypothesis (on randomness) despite its being false.

Originality / value of the article:—

Aim: The aim of the paper is to measure risk and profitability of selected financial instruments.

Design/Research method: the theory of order statistics, with a particular emphasis on extreme statistics, was employed in the research. The suitability of Wiener process and Ito’s process for the description of stock price volatility was investigated.

Conclusions/Findings: Based on KGHM shares, the stability of parameters of the rates of return distribution was found.

Originality/Value of the article: Two separate theories within the scope of stochastic processes, extreme statistics theories and Ito’s processes, were combined in the paper. The application of the appropriate distribution of the rate of change is a new and original proposal.

Aim: Within the neoclassical microeconomics framework the long-term goal of the enterprise is to generate economic profit (above average profit). In case of competitive markets, the preservation of economic profit is impossible in the long run due to increasing competition. It is therefore important, both from the scientific and antitrust law perspective, to verify empirically whether companies’ abnormal profits are characterized by a tendency to persist (persistence). The main objective of the study is to examine the level of profit persistence of Polish enterprises both at the aggregate level and at the level of industries.

Design / Research methods: The abnormal profit persistence analysis was carried out on the basis of unbalanced panel data for 38253 Polish companies in 2006-2014 using the system GMM estimator.

Conclusions / findings: The results obtained show that the abnormal profit of Polish companies in the analyzed period was characterized by low persistence both at the aggregate level and at the industry level, which indicates a high level of competition in the industries under investigation.

Originality / value of the article: This paper contributes to the existing profit persistence literature in three ways. First, the analysis was conducted for a developing country. Second, the analysis was carried out both at aggregate and industry levels. Third, the analysis was conducted mainly for the period following the global financial crisis.
Implications of the research: The results of the study are not only interesting from the scientific point of view, as they verify empirically the notions about long-run profitability of companies stemming from the theory of industrial organization, but equally important is that the results may be useful for antitrust policy and the assessment of the competitiveness of industries.

Limitations of the research: Among the most important suggestions coming from the research conducted is that the future analyses need to focus on more narrowly defined markets, because further disaggregation can reveal significant differences in the abnormal profit persistence.

Vol. 5, No. 3, 335-355, September 2017
Application of generalized estimating equations in the analysis of factors affecting consumers’ readiness to purchase services

Aim: The main aim of the paper is to define how the country of origin effect (COO effect) affects consumers’ readiness to purchase services.

Design/Research method: The data was collected with the use of an auditorium survey technique. The questionnaire form was filled in by 264 students from Poland, Lithuania and Germany. In order to identify the factors affecting the readiness to purchase services in the context of the COO effect, generalised estimating equations were applied.

Originality/Value of the article: The analysis of the changes in the strength of influence exerted by the COO dimensions on the readiness to purchase services, depending on the factors discussed.

Research limitations: A relatively small sample of the respondents who come only from one university in each of the three analysed countries. The lack of the analysis of the dependence discussed referring to the particular services and particular countries of origin of services.

Aim: The goal of the article is to understand the place, role and importance of intellectual capital in the development of society and (above all) answering the question of what and why causes the observed changes in its levels.

Aim: The aim of the paper is to test and confirm the thesis on the possibility of the application of the Cumulative Sum Control Charts (CUSUM Charts) effectively in monitoring reliability and durability of a product.

Design/Research method: The study employed the cumulative sum control procedures that can be used for diagnostic variables distributed exponentially. This kind of distribution is often used to monitor reliability and durability of products or processes.

Conclusions/Findings: The sequential methods presented and examples of applications of the solutions outlined in the paper seem to confirm the validity of the thesis on the possibility of using effectively the CUSUM charts for monitoring product reliability and durability. The methods presented in the paper can be used in practice by economists, quality managers or production technologists.

Originality/Value of the article: The novelty (originality) of the paper lies in that the control charts presented can be used to either accept or disqualify the process analyzed. This feature is not present in the classic CUSUM procedures. This paper is a part of the wider collection of the author’s works focusing on the problems surrounding acceptance cusum control charts. According to the author’s knowledge, no similar studies have as yet been conducted.

Aim: The paper presents the idea behind Turquoise Companies (Evolutionary-Teal Organizations) by giving their definition as a style of human relationships unfolding in a company. This style involves the removal of a fixed hierarchy while ensuring full engagement of workers in the development and activity of the company. Moreover, the question is raised whether Turquoise Companies will become a common model in the future, or whether we are dealing here with a utopian idea.

Conclusions/Findings: The structure of management styles used in companies could be improved by increasing the proportion of turquoise firms.

Originality/Value of the article: The paper provides some thoughts on Turquoise Companies of the author, having more than 70 years scientific experience.

Vol. 5, No. 3, …., 2017
Simplification of Decision Problem Structure by Means of DEMATEL Application

Originality / value of the article:

Implications of the research: